Southgate Street Watch is a police-backed patrol implemented by a local N14 parent in light of the worrying rise in children being mugged after school near the tube stations, bus stops and on the streets. With Enfield currently having the highest rate of serious youth violence in the capital; school children being threatened and robbed has almost become normalised.

On Tuesday 10th December 2019, a Year 10 student was subjected to a nasty attack outside Southgate tube station on his way home from school. Sadly, the student was one of a number reported to the school that week.

Southgate Street Watch is a patrol based initiative that is led by the community for the community. The Police-backed scheme brings people together to help make the streets safer for everyone. They have been well received in the community with strong support from the local businesses, parents, residents and schools. The scheme has already established a group of volunteers who have had successful patrols alongside the Police in Southgate. However, the aim is to patrol more frequently after school. The volunteers are vetted, insured and receive induction training before they start. They provide a visible presence and report anything suspicious in the neighbourhood.

The Street Watch organisers are still looking for more volunteers to help increase the patrols. If you have a couple of hours or whatever time you can spare and wish to volunteer or find out more about the scheme email:

For over 40 years we’ve thrown open our doors on Christmas Day to the elderly and disabled who would otherwise be on their own. It’s a real celebration of community, activism and performance, and it shows the power we have as people to create positive social change for those around us.

The day is entirely volunteer-led and one thing we would like do this year is celebrate them. We work with a fantastic team of volunteers who act as drivers, cooks, entertainers, carers and waiters to make Christmas as special as possible for those who do not have family or support that can be with them during the holiday. For many, volunteering at Jacksons Lane has become as much of a tradition in their families as stockings, carols and cold turkey sandwiches on Boxing Day.

“I’ve met a lot of new people, heard some amazing stories and been part of an event that really does make a difference to the community. Guests come from all walks of life, with the connection that they would otherwise be on their own on Christmas Day, makes for a memorable and fun day.”

Both guests and volunteers return on Christmas Day year after year – and the combination is extraordinary.

We have an incredible array of talent on the day too, including Mo’s MC skills and the Highgate Choral Society, with an unmissable trio of sister’s tap dancing.

Plus the man himself, the one and only Santa Claus, makes an appearance. He delivers presents to every table, stopping to chat to each and every guest.

We rely on donations to make this wonderful event happen each year, raising thousands of pounds to make this vital work possible. It is only through the generosity of the community that we are able to do this, and we cannot say loudly enough what a hero every volunteer and every donor is to us.

“I would encourage anyone to volunteer, the event organisation is brilliant, the venue magical and the guests unique.”

Thank you to everyone who has made Christmas Day at Jacksons Lane possible since 1975. The impact you make for the people who rely on this service is the best Christmas present we could ask for.

It’s incredibly rewarding to be a part of the community effort and a privilege to talk to so many interesting elderly people who you would not get to meet otherwise. Roll on Christmas!

It takes a community to tackle violent crime

Violence on our streets impacts on the whole community.  A family contacted me recently whose 4-year-old child had to witness the horrific aftermath of a stabbing near his home and all too often people tell me they’re nervous to go out after dark even in their own neighbourhoods.

It shouldn’t have to be like this and it’s no surprise that community groups are stepping forward to say enough is enough.  I recently attended a meeting organised by Stop Knife Crime in Muswell Hill, a community-led effort to find grassroots solutions to rising levels of crime in the neighbourhood.  One of the points that came up time and again was around communication of initiatives already in place and effective joint working across the Police, council, voluntary groups, schools and the community.  It’s an important point as it’s true to say Haringey Council are already doing lots proactively and, despite nearly a decade of cuts, they’re investing in youth services.  Working together with London’s Mayor Sadiq Khan, last year they were awarded £1.5milllion for a Community Gold programme to try and prevent young people getting caught up in crime by re-introducing detached youth workers in the borough.

But it’s impossible to take what’s happening here in Muswell Hill out of the bigger picture of rising violent crime and falling police numbers nationwide.  Bobbies on the beat do matter but the Community Police Officers who provide such crucial reassurance and local knowledge are being taken off their beats – no longer ring fenced to this essential role.  In Hornsey Ward I’ve been told that there is essentially no local police presence at all at present and no likelihood of this changing in the near future.  It’s something I’ve written to the Home Secretary about and I’ve urged her to let me know how many of the supposed new officers will be coming to Haringey and what is being done to ensure Community Police Officers are present and patrolling in the areas they serve.

At the community meeting there was also strong support for early intervention work – a point I have repeatedly made in Parliament.  I’d like to see a special fund for children at risk of school exclusion as a high percentage of perpetrators were excluded from school in their early teens.  It’s something I met with the Secretary of State for Communities and Local Government about and I will continue to make the case at every opportunity.

In the meantime, I’ve met with London’s Deputy Mayor for Policing Sophie Linden along with David Lammy MP and Haringey Council’s communities lead Cllr Mark Blake and been in discussions with Haringey’s Borough Commander about the establishment of a Youth Safety Taskforce to address some of the problems our community is seeing including youth violence and a lack of trust in the police.  It’s an idea we’ve seen work well in Camden and I’m keen to do anything I can to support.

It takes a community to tackle violent crime and it is inspiring to see Muswell Hill residents’ take that lead.  Search “Stop knife crime in Muswell Hill” to find their group on facebook and get involved.

The Highgate Society is holding its annual “Carols in Pond Square” on Wednesday, December 11th starting at 6.30pm.  The music is provided by the Highgate School Symphonic Band and Concert Choir.  Master of ceremonies, Dan Hall, author of the book “Highgate Mums”, will once again be encouraging the assembled crowd to join in the singing of popular carols.  Pond Square is decorated with lights and it is the perfect place to start to Christmas celebrations with family and friends.  After the event, mulled wine and mince pies will be served at the Highgate Society, 10A South Grove, Pond Square.

During the carols there will be a collection in aid of the charity Little Village Camden which, thanks to donations of clothes, equipment for babies and children up to the age of 5, is able to help so many local families in need. 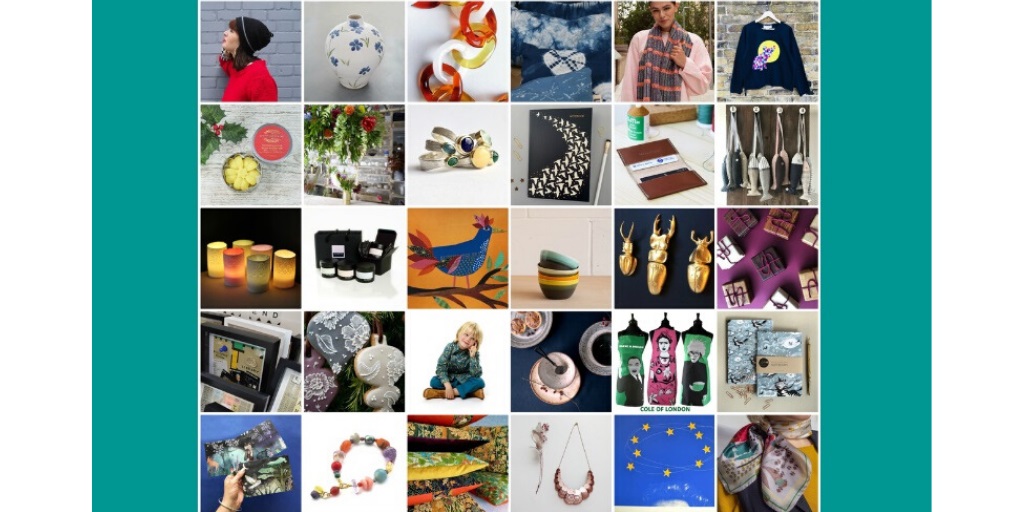 For the full line-up head to: www.muswellhillcreatives.com/markets 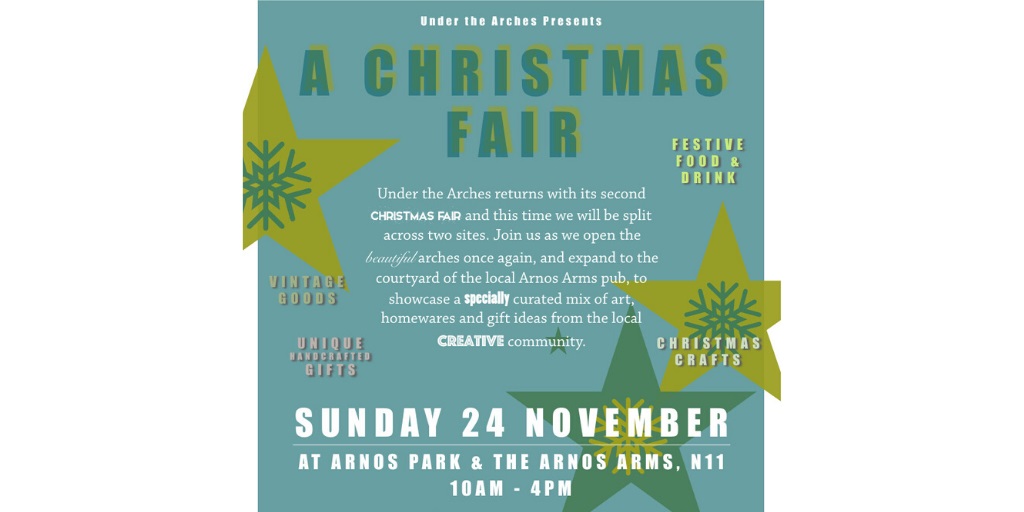 Under the Arches returns with its second Christmas Fair and this time we will be split across two sites.  Join us as we open the beautiful arches once again, and expand to the courtyard of the local Arnos Arms pub, to showcase a specially curated mix of art, homewares and gift ideas from the local creative community.

« Older Entries
We use cookies to ensure that we give you the best experience on our website. By continuing to use this site you are consenting to the use of cookies.OK